Day 1: Nairobi – Drive to Masai Mara Game Reserve (Approximate transit time: 5½ Hours)
Pick up from your hotel in Nairobi at 0800 Hours and depart for Masai Mara by road. On our way we make a brief stop at a viewpoint to enjoy the views of the Great Rift Valley.

Continue by road driving through the lower portion of the Great Rift Valley and across the iconic savannah wilderness to the world famous Masai Mara Game Reserve.

On route, you might notice a Masai Moran (warrior) holding a single stick or a spear, standing on one foot or herding hundreds of cows and sheep. The Masai Mara is characterized by its vast acacia-dotted plains and lakes, and its spectacular escarpments where the movie ‘Out of Africa’ was filmed.

But the animals of the Masai Mara are the real stars of the show, providing drama and intrigue against a backdrop of spectacular scenery. Arrive at the camp in time for lunch, followed by some leisure hours for a siesta before you depart for an afternoon game viewing drive, and return back to the camp before sunset. 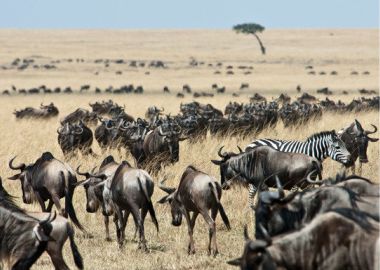 and the spectacular wildebeest migration. Remember to keep a sharp lookout; you may witness a dramatic hunt, a solitary leopard retrieving its kill from the high branches of an acacia tree, or a herd of elephants protecting their young from predators.

The Mara has one of the richest wildlife ensembles, as well as being the backdrop for the spectacular world-famous annual wildebeest migration. The migration is considered to be one of the natural wonders of the world, especially as they cross the Mara River.

The reserve has over 95 species of mammals and over 400 species of birds. Game viewing is never dull in the Mara and patience is usually rewarded with unique sightings. All meals (breakfast, lunch & dinner) will be served at the camp.

Day 3: Masai Mara – Drive to Nairobi
For your final day in the Masai Mara Game Reserve, an early morning game viewing drive is planned for you, or instead, you might decide you would like to sleep in. Breakfast will be served at the camp, after which you will depart by road to Nairobi.

The tour ends in Nairobi early in the afternoon.Your African Safari memories will last forever.