Day 1: Nairobi – Masai Mara
The 4 Days Kenya Safari starts with a pick-up by one of our driver either from your Nairobi hotel, residential house, guest house, apartment or from the Airport upon arrival as early as 0700am depending with the location of your Accommodation. Then proceed to the departure point where you will meet other travelers who will be joining the same 4 days Kenya Safari if not a private safari. You will have a short Safari over view description as per the itinerary as you get to know each other. There after depart for Masai Mara with the first stop at the Great Rift Valley View Point. This is a perfect place to be in the early morning and evening. You will watch enthralling Rift valley with it’s vast vegetation and the sun rays kissing the far and wide stretching mountains in the surrounding. The Great Rift Valley has been reckoned as a wonder of the world stretching from the Middle East passing through Africa and has a great and vast chunk in East African part and ends in Mozambique in the South. After about 15-20min of getting history you will proceed to Narok. Narok is a town west of Nairobi that supports Kenya’s economy in south-west of the country, along the Great Rift Valley. Narok is the district capital of the Narok County and stands as the major center of commerce in the district. Narok has a population of around 40,000 people, mostly Masai. The Masai, natives of Narok district, refer to Narok as Enkare Narok (meaning black water or dark water) named after, Enkare Narok, the river flowing through Narok town. The elevation of Narok is 1827 meters (5,997 feet) in altitude. You will have your hot lunch here and there after proceed to Masai Mara, on arrival you will be received by our Masai Mara Staffs and then assist you to check in the Camp, leave for the late afternoon game drive which starts immediately upon your arrival, this game drive offers you the 1st day 1 evening big 5 kill as well as Africa Sunset around 1830hrs, then our driver will drive you back to the camp where you will be served with Africa food in the Camp.

Day 2: Masai Mara Game Reserve Full Day
Masai Mara is situated in south-west Kenya and is one of Africa’s Greatest Wildlife Reserves. Together with the Serengeti National Park in Tanzania it forms Africa’s most diverse, incredible and most 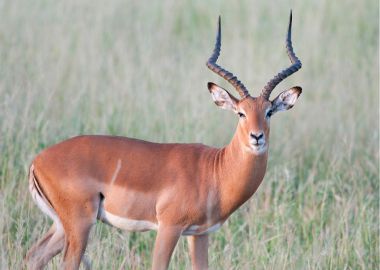 spectacular Eco-Systems and possibly the world’s top safari big game viewing Eco-System. I am sure you have heard the wildebeest migration is nothing short of amazing. It is one of the things you have do add to your bucket list. This will be the full day explore the Masai Mara, breakfast will be served as early as 0730am, then our cook will pack for you fresh picnic lunch since the whole day will be exploring the Masai Mara famous 7th wonders of the World. This game reserve is Kenya’s finest wildlife sanctuary. Including migrants, well over 450 species of animals have been recorded here. Mara plains are filled with migrating wildebeest and zebra, there is also resident wildlife year round. The Mara’s gentle fertile climate bounded by The Rift, offers perhaps the richest stocked reserve set within some 1672 sq km – an unlimited spectacle of wildlife. Located 268 km west of Nairobi, the emphasis here is on game. Herds of immense Elephants, browse among Lion, Buffalo, Thompson Gazelle, Zebra and Topi. You may occasionally sight black Rhino. In the Mara River Hippos play and Cross bask on the banks. The annual migration of a million Wildebeest follows the rains north.After exploring the park return to the camp or Lodge for dinner and overnight.

Day 3: Masai Mara – Lake Nakuru
You will have a wake up call as early as 0600am, you will have hot African Coffee or Tea and then proceed for Pre – morning game drive as from 06:30hrs for the next 3 hours until 0930hrs, then our driver will drive you back to the camp where you will be served with full breakfast as you check out the camp to proceed to Lake Nakuru, if willing on this day you can as well visit the Masai Village for one hour and learn more of the Masai Culture, lunch will be in Narok town or ( Mai Mahiu) hot water after lunch proceed to Lake Nakuru and arriving early evening and if time allows you will have short game drive as you head to the Lake guest house or Budget hotel

Day 4: Lake Nakuru – Back To Nairobi
The Bird Watchers’ Paradise the Lake is on the floor of the Great Rift Valley, surrounded by wooded and bushy grassland, lies the beautiful Lake Nakuru National Park. Visitors can enjoy the wide ecological diversity and varied habitats that range from Lake Nakuru itself to the surrounding escarpment and picturesque ridges. Lake Nakuru National Park is ideal for bird watching, hiking,picnic and game drives. Breakfast will be served at around 0730am there after proceed for the game drive, you will have a chance to visit a unique sanctuary catering for a sizable number of the endangered White and Black rhinos as well as Rothschild giraffe. Water bucks, predators such as the lion and leopard are common at the park. Also to be seen is a myriad different variety of bird life in and around the lake. Flamingo’s are also plenty at the lake. Leave for Nairobi late afternoon arriving in Nairobi in the afternoon with a drop off to the hotel of your choice or back to the airport to catch up with your flight for the next destination.